Up until very recently I’ve been using a very standard Vim installation on my Mac to develop my shabby software in any language really. But I’m centering most of my energies as of late in Scala and Haskell… Haskell and Scala… whichever order you’d prefer.

Point is, if you see my ~/.vimrc file, you’ll see that amongst other things I’m using syntastic which is actually quite great. However it’s a common complaint that for Scala it’s a bit slow.

You can try this yourself, and see that when saving files you have to wait quite a bit for that to work1. This makes my computer and development environment jumpy, and therefore it absolutely breaks my flow.

Trying something new… and failing

So my first attempt was moving to Emacs. As of writing I haven’t completely given up on it. But I’m in the middle of learning new things and learning to type in a new editor is just an additional layer that is stopping me from many developments that I consider have more priority. I haven’t fully stopped or given up on Emacs just yet, so I could write about that in the future.

It’s great however that Emacs has evil-mode, which is a vim emulator and goes great lengths to make you familiar with the environment even if it’s just an initial step there. Another great resource would be Aaron Bieber’s video.

In his video, Aaron doesn’t really go into detail of how he sets everything up, however you can do like me and rip off his dotfiles2.

Trying something new-ish… and succeeding

So Emacs was ok-ish for me coming from Vim. There’s a learning curve there and I simply don’t have the time to take it all in this month.

In comes neovim. I had tested it about a year ago with some unfortunate results. The main one being that most of my plugins weren’t working out of the box. That doesn’t seem to be a problem thus far, however.

Installation was a breeze…

I suppose that if you’re not using brew then your most readily-available package manager will have it. You should always look at the wiki.

My ~/.nvimrc file is below, for your copypasta pleasure.

It’s not so different from my original ~/.vimrc file. It has some significant changes however, and they make quite the difference.

Firstly, I moved away from Vundle, and have started using vim-plug. The main difference being that the latter is async in neovim and downloading all of my plugins takes less than 5 seconds. Compared to Vundle’s 30-40 seconds, that’s a great improvement.

Secondly I’ve scratched syntastic and have started using Neomake, which, if you look at the footnotes, you’ll see that it implements a proposal for syntastic with async dispatch. In other words, it not only checks your files but it also does this in the background, keeping your flow intact.

Additionally I installed a patched version of my favorite font with some fancy devicons.

Now I’m also using deoplete, for auto completion, and it also uses neovim’s async features. For that I had to run

Which will allow neovim to interact with python. It’s important that you have python3 installed, which is why I’m running pip3 up there. 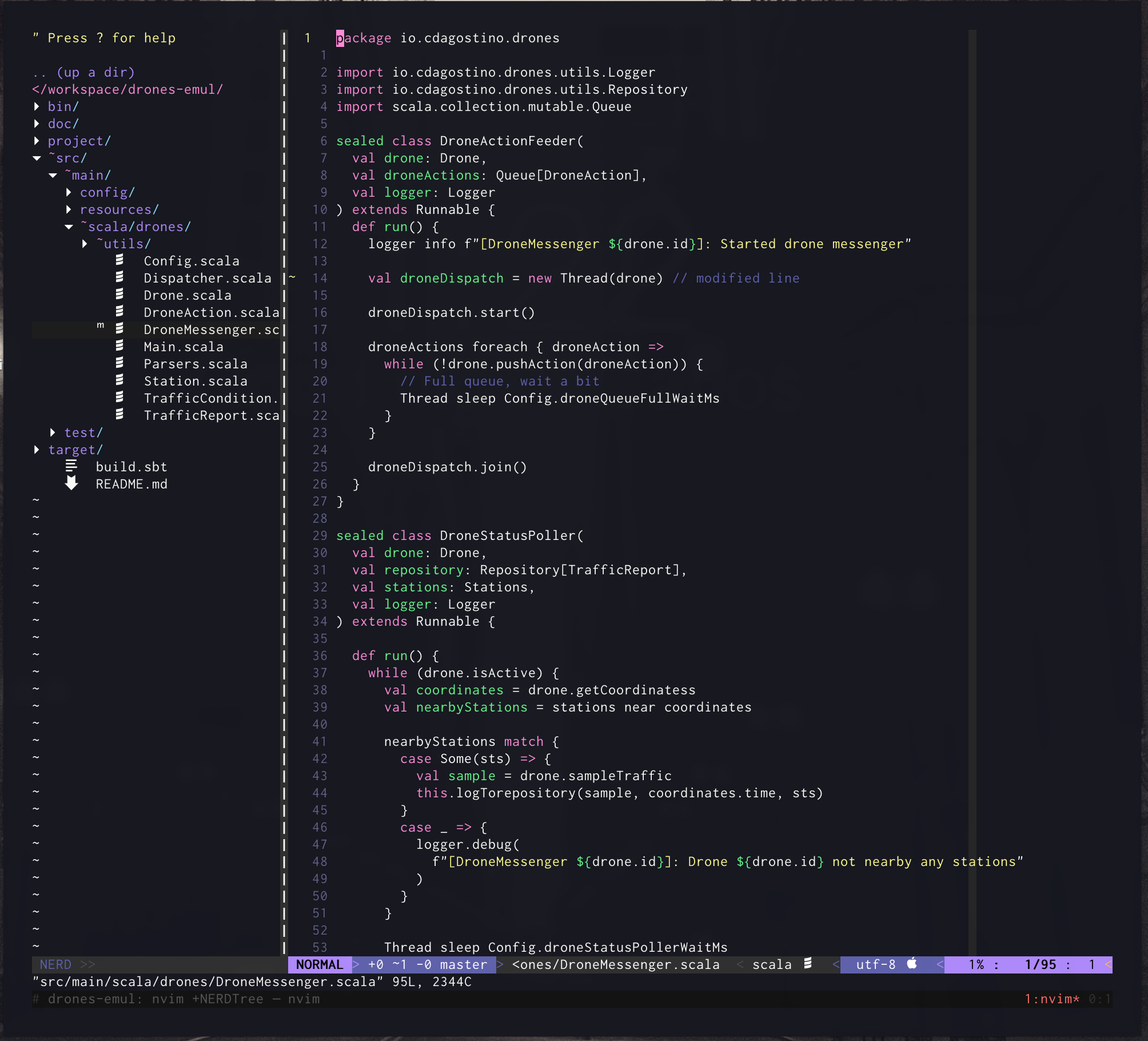 And I get autocompletion for Haskell4 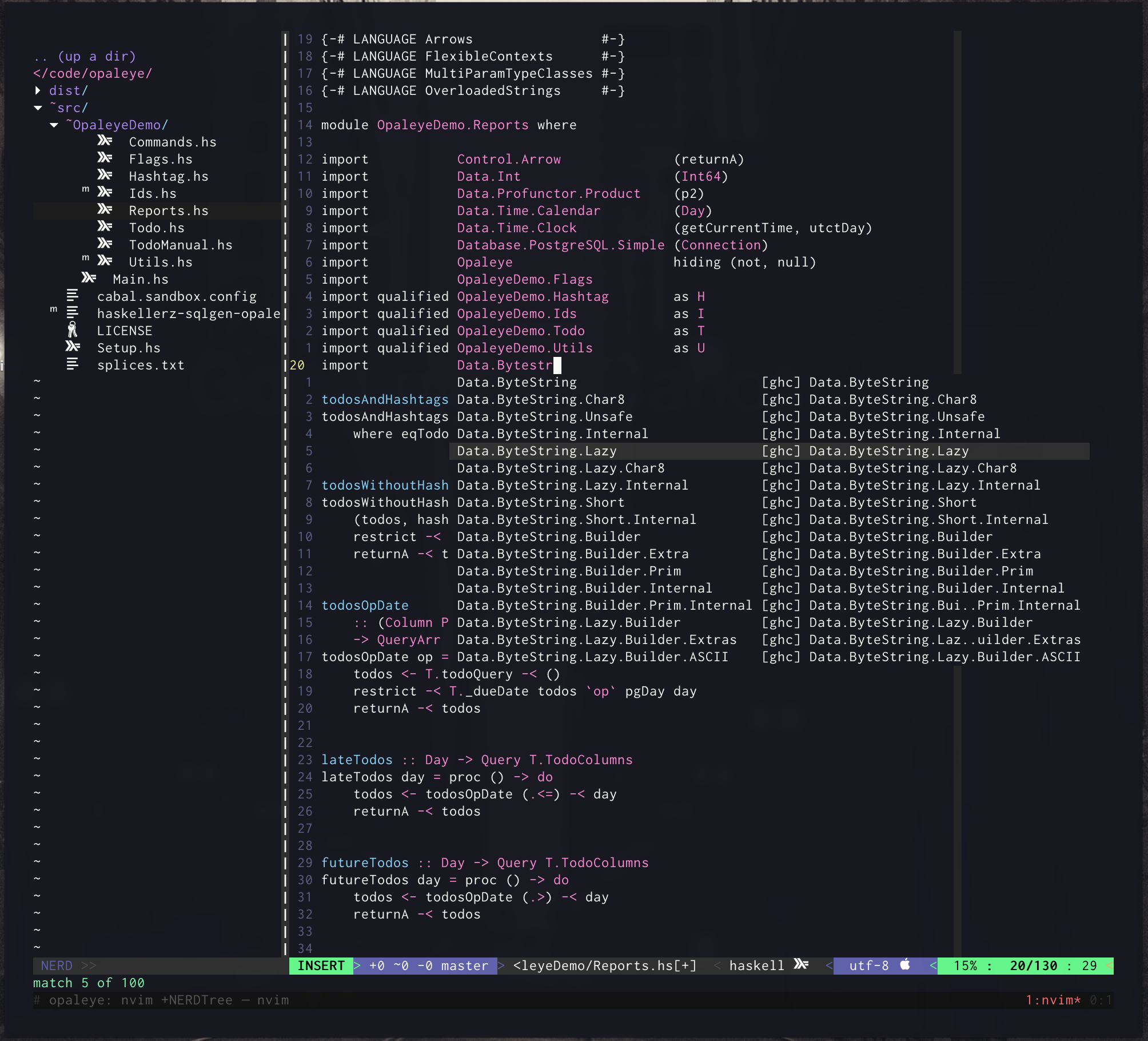 In the case of Haskell, I had to hack my way through it actually to get it to work with deoplete. It uses ghc-mod, which was breaking when installed globally with cabal. So I downloaded it from github and compiled it from source in a cabal sandbox. Then I just moved the executable file to my ~/Library/Haskell/bin/ path. Problem solved, but there’s a voice in my head telling me I’ll pay in the near future for such insolence5.

The change was fast and painless. It feels like I’m in the same familiar environment as before but the small features make all the difference. I feel like when I moved from an IDE to vim, only with less hassle and less of a learning curve. Kudos to the neovim team for making it happen.

Nothing much, really. I suppose that in this case you should just download the software and test the plugins to your liking.

As a little side note: I don’t like IDEs. I think that they’re great, but I avoid them like the plague. Whenever I pick up a new IDE it feels like I have to, in addition to whatever framework or language I’m learning, learn how the IDE works. IDEs can be complex, and on top of that they can, and will, make my poor laptop very slow. I don’t have infinite RAM so running an IDE and Chrome on the same laptop? Not for me.

I now have https! I used Let’s encrypt. It was also a breeze. I know this has very little to do with the rest of the post, but I just feel like I need to mention it but don’t feel like it deserves its own post.

If anybody wants to give me a gift, a vinyl of this record would be awesome 😅