Randomness - Nowhere near the mouse lately

So this is just a little off topic, but lately I’ve been breaking some old habits and I’m enjoying it so much that I’ve decided to write about it1.

Not too long ago, I was writing in IDEs, I’ve written about that previously, but to make a long story short: they’re a bit too bloated for my tastes. I find them useful if they’re exclusively the best choice for the job, like with Java, but aside from that I prefer Vim.

One of the things I like about Vim the most is that I find that, through a little tweaking and fancy plugins, you can start to get a pretty natural feel for the control of the editor. Through some practising and trial-and-error, you start to overcome the learning curve and gradually become faster and more productive as you write more and more2.

Through the use of Vim I found I was reaching for the mouse less and less whenever I’m writing, which in turn made me lazier, but more productive. It really does seem very insignificant, but reaching for the mouse is not about the time that the action itself takes, but rather for me it’s about breaking some sort of continuous activity. I think about it almost as the concept of the flow, but almost in a strictly physical aspect.

So as I used Vim more and more, I started to be “annoyed” when I had to reach for the mouse for other tasks. Like…

I use a borderless version of iTerm2, and being iTerm it has its own pane management, which works really nicely and I used it for a couple of years. I then started to use tmux because I found it easier to configure, and it adapted itself quite easily to Vim shortcuts.

I did have a slight learning curve for it, but thanks to the program lending itself to plugins, I had a bit of an easier time adjusting.

At this point I was using vi-style keystrokes to move the cursor around not only in my editor but also throughout my panes and general shell usage.

Still not enough, though, because I don’t spend all my time in a shell3.

One day, by chance, I heard about Vimium, which allows you to use your browser as though you were using Vim. And in fact the relation I’ve established with it is that it’s like using Vim with the easymotion plugin.

Vimium makes for a totally different browsing experience, and now I was hardly reaching for the mouse. But still there were some other apps I often use which either don’t lend themselves to easy keyboard-only navigation, or I simply just never got accustomed to how they’ve been implemented; like Skype, for example.

As a little side note, Vimium by default doesn’t work in Gmail. However Gmail by itself implements some shortcuts and it works very natural with how you’d move around in Vim. You need to enable those first.

So I was nearly there, except I was using the mouse for all tasks that weren’t related to the shell or my browser. Which got me thinking that maybe there was a chance to use the OS in general in the same way. Through some good ol’ googling I found Shortcat.

This, again, works almost in the same way as finding an element in the currently-focused window and going to it, though it does this through an emulation of the mouse movement and clicking.

The keystrokes themselves in this case are not vi-style however it’s still quite natural.

The app itself is still in Beta, so sometimes it can crash. All in due time, however, and I think the app has great potential.

The results are already obvious, enough to motivate me to write about it all.

Using Vimium’s function to select the clickable items in the current page: 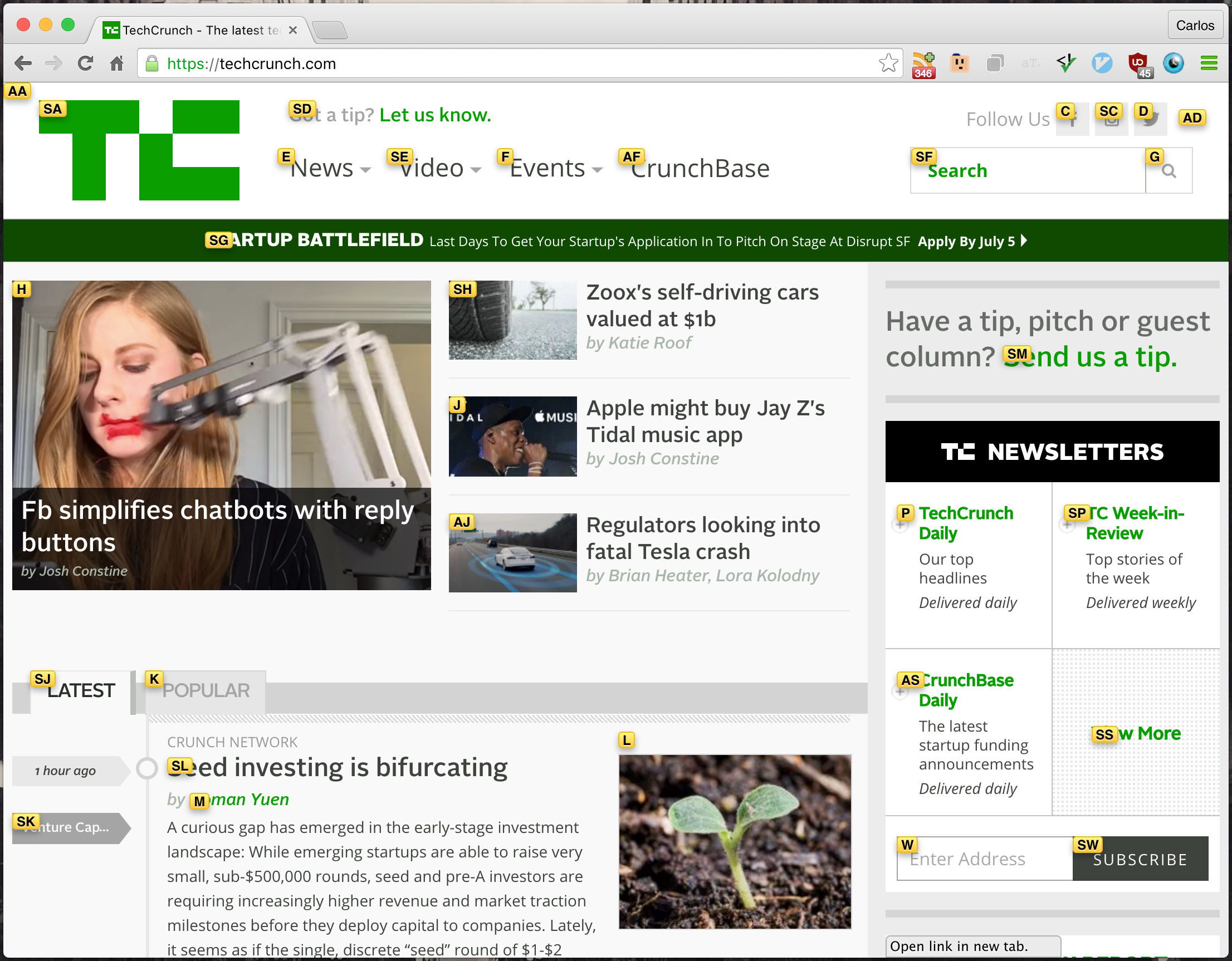 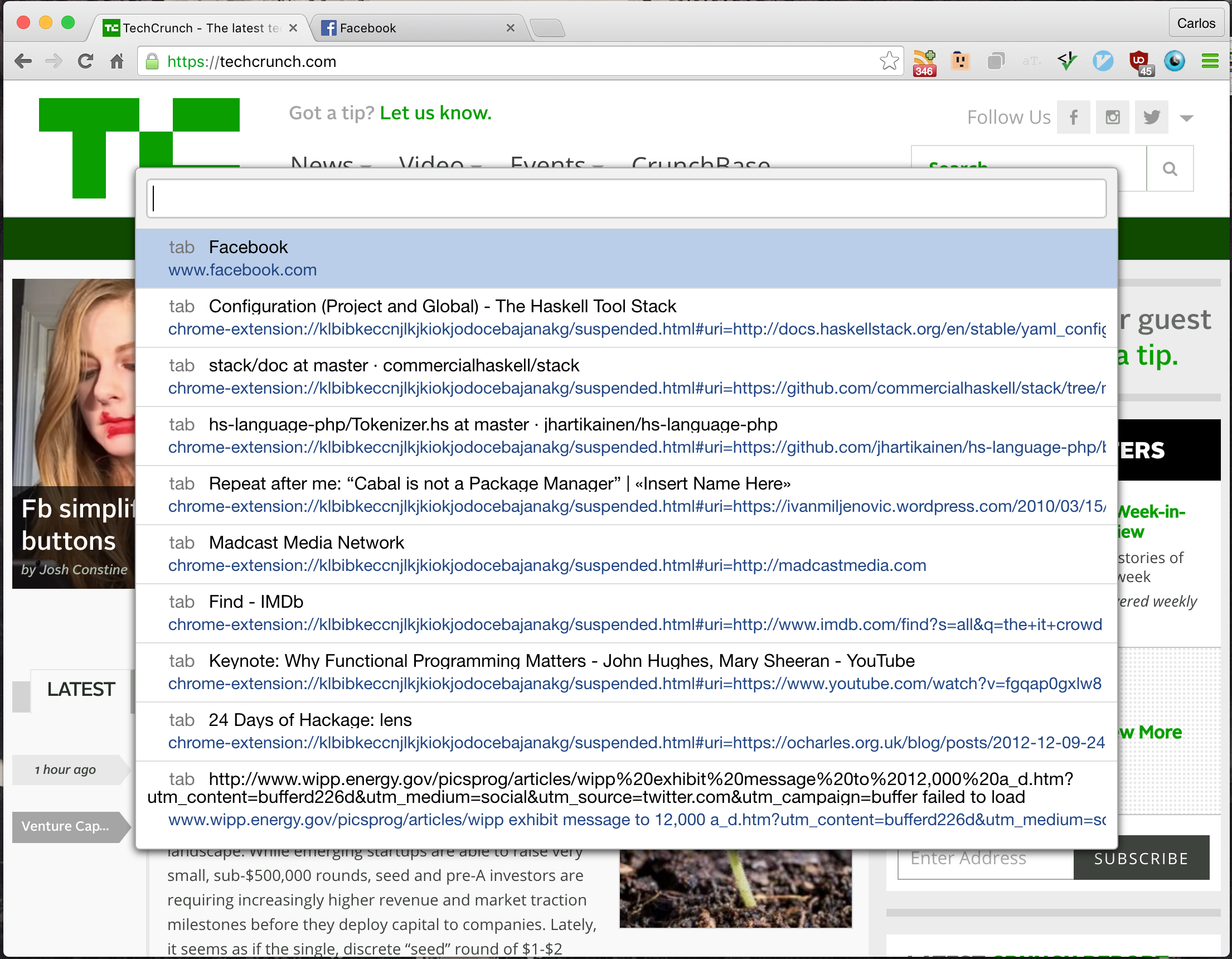 If you just type a dot in the search bar, you get all the options available: 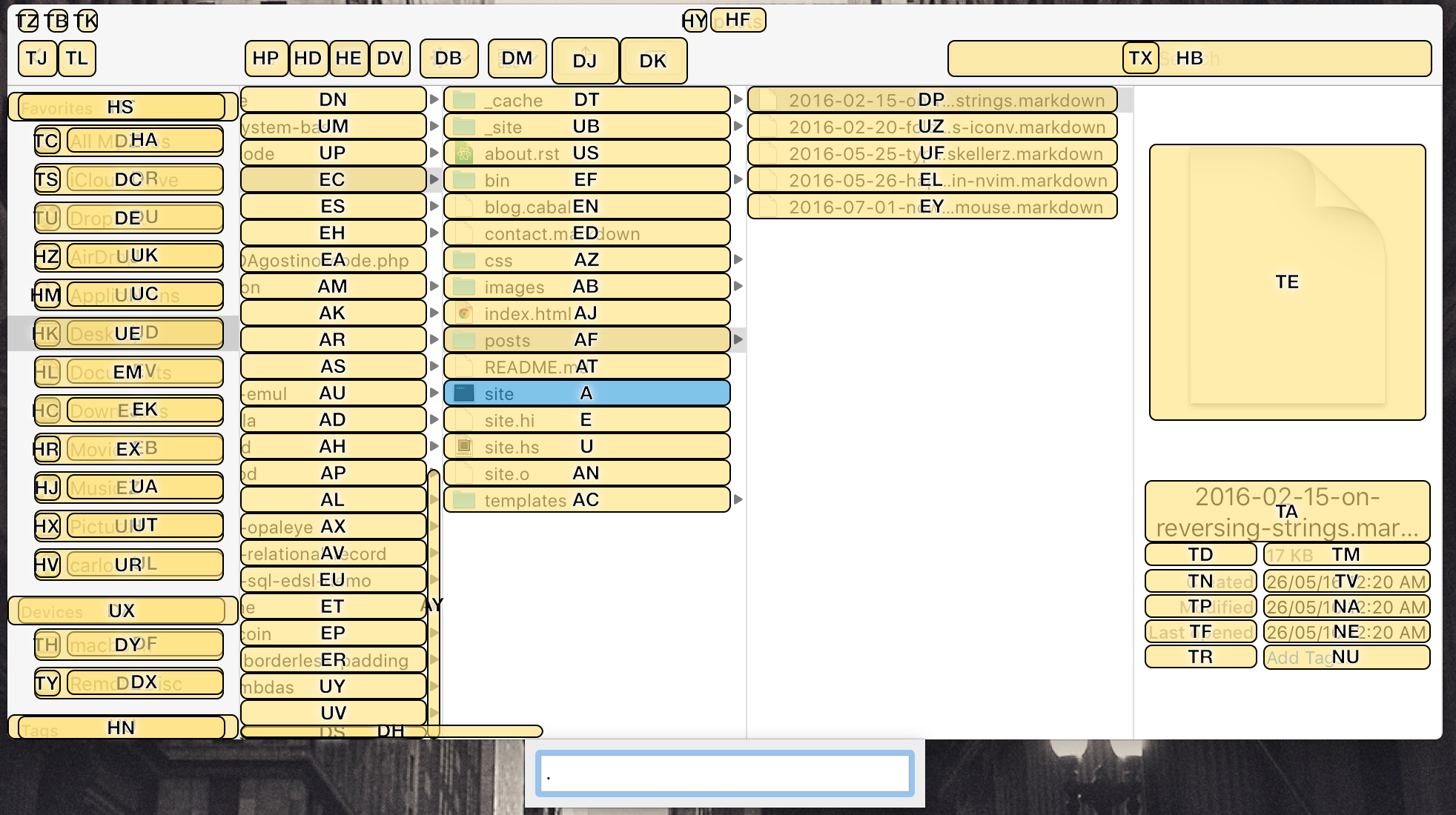 But you can of course just type where you want to go and then select between the resulting options: 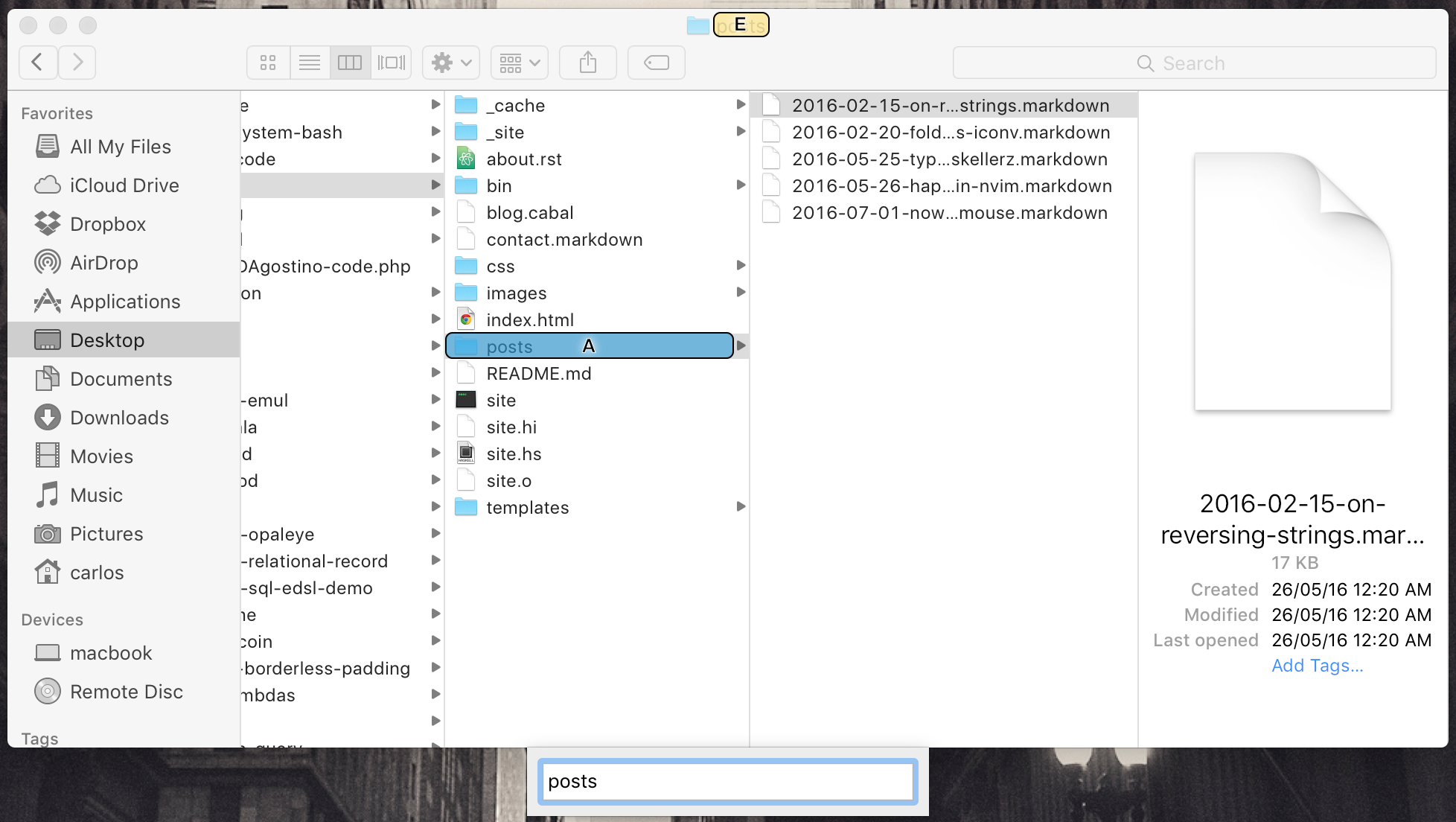 Upon further reflection, though I’m having a lot of fun, I can’t help but think that there’s been so much work on getting mouse-aware applications and X window systems, and now there’s so many programs working on top of that to “get rid” of the mouse. Ha! Still fun, though.

Anyway, since last post I also wrote about my work/play machine, I believe I’ve had enough of writing about it. So next posts should be back to programming! With ZuriHac coming up, maybe there’ll be some notes on that with some pictures.

I don’t just use these apps for productivity, there’s plenty more that can be used, like Alfred, which is quite popular. I also use ShiftIt, to align my windows using the keyboard.

In other *nix systems there’s plenty of other cool, free, tools to be used, so if you’re not on OS X then look around and send me a tweet or something!

This is a rather good surprise album:

And actually, I’ve also heard these guys quite a lot and have been enjoying it thoroughly, so double-album post:

Waiting anxiously for that The Head and The Heart Album, after some disappointments this year, I’m really hoping that they will deliver some quality music, as they have done so effecitively and wonderfully thus far.